Open to the public, Film Screening, 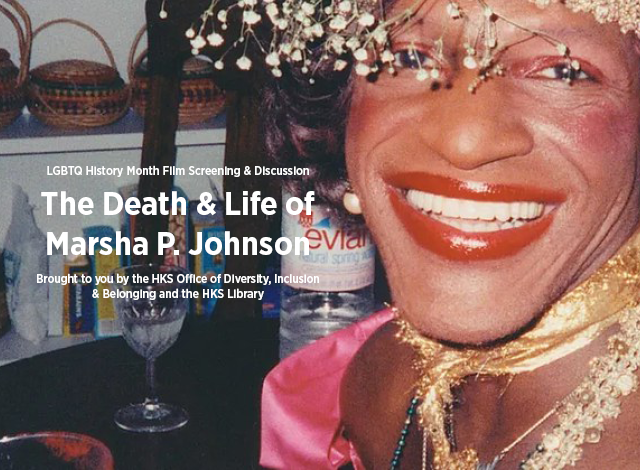 REGISTER FOR THE EVENT

Join the Office of Diversity, Inclusion & Belonging, the HKS Library, and the HKS LGBTQ Caucus for a screening of The Death and Life of Marsha P. Johnson, followed by a community discussion. Refreshments will be provided.

Marsha P. Johnson was a transgender activist icon, known worldwide as “the Rosa Parks of the LGBT movement.” Marsha was a prominent figure in the Stonewall Uprising of 1969, a founding member of the Gay Liberation Front and Street Transvestite Action Revolutionaries (S.T.A.R.), and an AIDS activist with ACT UP. In 1992, Marsha’s body was found floating in the Hudson River. The Death and Life of Marsha P. Johnson follows the activist-led investigation into Marsha’s death, celebrating her life along the way. It is directed by David France, whose first film How to Survive a Plague chronicles the activist efforts of ACT UP and TAG during the early years of the U.S. AIDS epidemic.

LGBTQ History Month is celebrated annually throughout the month of October to observe lesbian, gay, bisexual, and transgender history. In 1994, its first organizers chose to celebrate LGBTQ History Month in October to coincide with National Coming Out Day (October 11) and the anniversary of the first National March on Washington for Lesbian and Gay Rights (October 14, 1979).

All attendees must follow HKS’ COVID-19 protocols. Those without an HUID may enter via the Wexner security desk. The event room is accessible to those needing mobility accommodations (take Wexner elevator up to fourth floor). Content warnings for the film include suicide, anti-trans violence, sexual assault, and physical assault.